As anyone who has been following 70 Minutes of Home knows, the campaign uses the innovative, SlowTV approach for the various films we have produced.

But what is SlowTV and why was it used?

We put those questions, and more, to Kathleen Healey of Ringers, the creative agency who behind the campaign.

KATHLEEN: The dictionary definition of Slow TV is “routine events filmed in real time that provide a relaxing viewing experience”.

How would you describe it for someone who is unfamiliar with the concept?

KATHLEEN: It’s the antithesis of endlessly scrolling through your phone looking for something interesting. In Ireland we check our phones on average over 80 times per day. And with that comes a level of anxiety. SlowTV shifts our brain from a mode of constant searching to a more relaxed one. Instead of looking for what’s coming next, it slows us down and let’s us enjoy the moment a bit more. 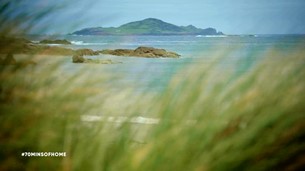 Are there any other examples of SlowTV you’d recommend that people may have come across?

KATHLEEN: I suppose the original is a good place to start. NRK the main broadcaster in Norway filmed a 7 hour long train ride from Bergen to Oslo. The Australian network took the idea and ran with it, making a cross continent version of their own called “The Great Ghan”. For Christmas it’s probably worth digging out the BBC outing called “All Aboard! The Sleigh Ride” where they follow a herd of reindeers across the Artic for 2 hours.

Why did you decide to use SlowTV for the ’70 Minutes of Home’ campaign?

KATHLEEN: Our job was to nudge people into coming back home to Ireland. That was the brief. Having lived away from home for a few years, I realised that it's the small things you miss the most. And trying to capture those elements truthfully in a 30 second commercial or 2 minute social film is almost impossible. People see through what you’re doing. But allowing them to lose themselves in the ordinary everyday elements of life in Ireland in real time was the key.

How has the campaign been received?

KATHLEEN: We are getting in footage of the films being viewed from every corner of the globe. People losing themselves in ordinary everyday moments of Irish life from balconies in Brazil, studio apartments in Berlin and poolside in Darwin. Has the use of the technique helped to bring focus to the campaign and highlight the unique appeal of Ireland?

KATHLEEN: Definitely. I mean from here, Galway is just Galway. Kerry is just Kerry. You get used to having beautiful beaches packed with wildlife or dairy farms overlooking the Atlantic Ocean. But living away from home, you inevitably get into conversations about how beautiful and unique Ireland is. And these films help with that. They remind us that there’s simply nowhere like it. Also we’ve found that brands promoting Ireland abroad like the Wild Atlantic Way have really picked up on the films and are sharing them widely.

Have you used SlowTV previously?

KATHLEEN: This is the first campaign we’ve used it in. I mean it is different in every way to what you’d normally expect from a brand campaign. From a shooting perspective you have to hold for incredibly long time on shots and allow the action to happen slowly rather than cutting and chasing after it. The edits take time too! But we’ve found that once people dive in, it’s incredibly rewarding. And they’re keen to offer suggestions as to where we might go next.

Tell us more about Ringers and the work you have done in producing innovative films and campaigns?

KATHLEEN: A Ringer by definition is an outsider that comes into your team and gives it an unfair competitive advantage.

As a business our main focus is on making teams better. Brand teams. Commercial teams. Sports teams. Because better performing teams, in our eyes are the future of companies.

Every team we’ve worked with has had what we call a “proper problem”. A small but hard to shift problem that can, if left unresolved stifle any number of areas of your business. So far we’ve helped to address these problems in An Post, Bank of Ireland, the Auckland Blues, Peopl. Insurance and of course, FRS Recruitment.

Watch the video below and learn why FRS Recruitment sponsored the GAAGO streaming service and sharing 70 minutes of home to Irish expats.